Be An Original: Senhit 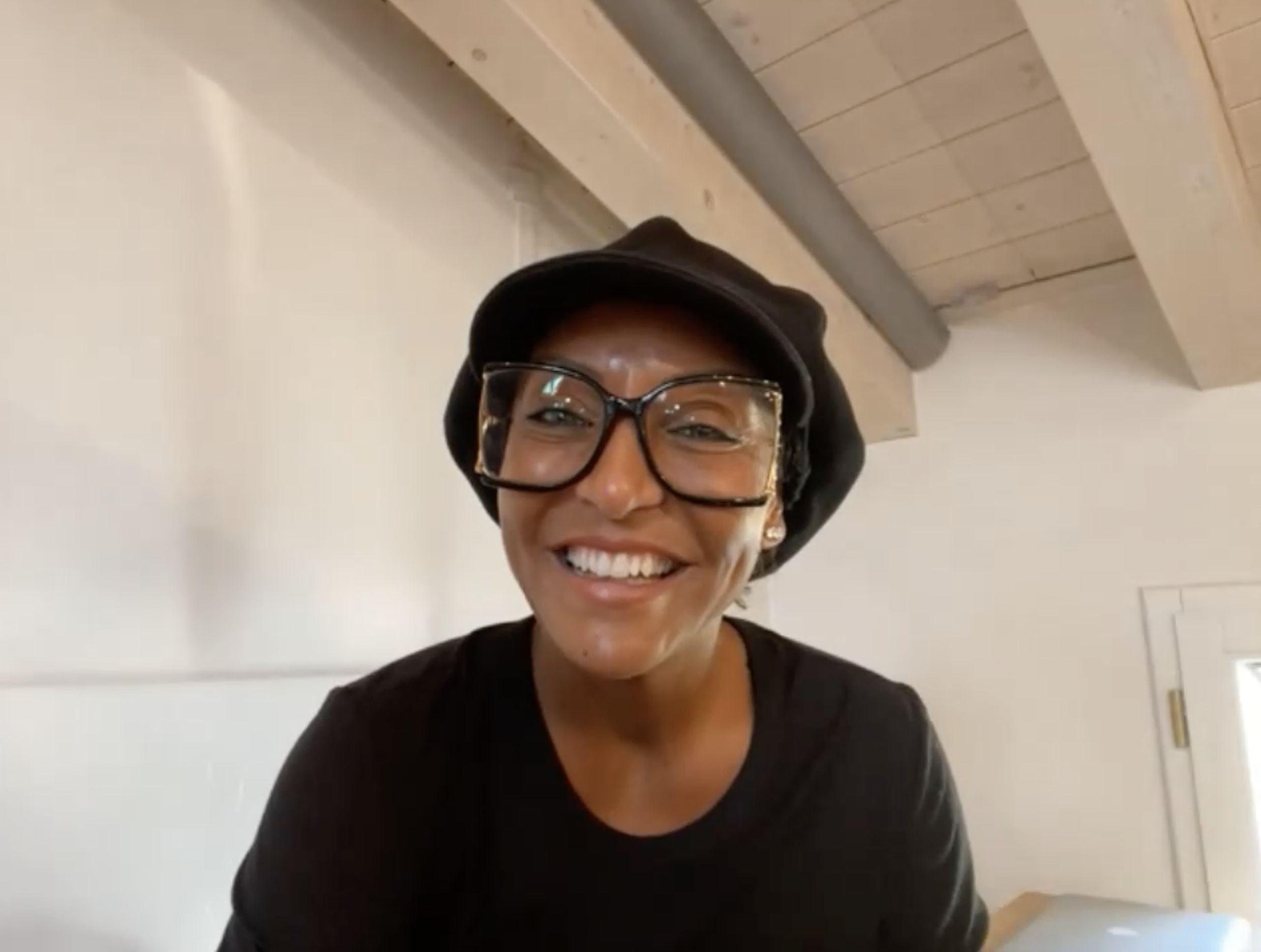 The singer is representing San Marino in the Eurovision Song Contest 2021 in Rotterdam with the song ‘Adrenalina’.

Performer Senhit—pronounced with an exaggerated ‘h’—is a force to be reckoned with. Born and raised in Bologna, Italy to Eritrean parents, her journey towards finding her passion is one that many of us can relate to. She had always wanted to sing and be on stage, but one of her parents wasn’t enthused about the idea at all. Senhit’s mother acted as the ‘heart’, always encouraging her to follow her passion. Her father, on the other hand, represented the ‘head’, always trying to steer her towards a life of education that would lead to a more traditional and secure career path.

“My Mum is very open minded and all about freedom…my father is more protective and worried about my career,” she said.

Senhit initially chose to follow her father’s advice and went on to graduate from university. However, she soon realised that this wasn’t the life she wanted to live, went against her father’s advice, and pursued what she had always dreamed of doing.

“I always wanted to sing, to be on the middle of the stage and entertain people,” she recalls.

Senhit fondly remembers putting on little shows for friends and family in her parents house. Then one day, she saw an audition for a famous Italian television program that searched the local streets for talented singers and the next big thing. Excitedly, she told her mother and they entered her into the competition, behind her father’s back.

Senhit went on to win that competition which became the catalyst that ignited her career – much to the displeasure of her father to the point where they ended up arguing about it.

“I fought with my Dad and then decided to walk on my own, follow my passion, and make that my career.”

Senhit’s entry into the arts started off with a bang, performing in several highly-acclaimed musicals.  She has always considered musical theatre to be “a complete art—100% a place where you could sing, dance, and act.” Senhit’s foray into musical theatre took her all around the world including Switzerland and Germany, with productions like Fame, The Lion King, and Hair to name a few.

And although Senhit now had proof that music could be a viable career, her life on the road meant that she had lost a lot of time with her family and friends. So, in her early 20s, she decided to head back home.

When the curtains closed on her musical career, Senhit found new opportunities to perform as a solo artist. “This company called me. They were famous for making football stickers but they wanted to invest in music for the first time—and they found me!”

While excited by the prospect of striking out on her own, Senhit was also daunted by the idea: “It’s a totally different world from musical theatre. Before, I could be someone else, but now I had to be me, I had to be Senhit.”

As she transitioned into the unfamiliar life of a solo artist, she found herself going from following a script to creating her own. It was tough for the Italian, but she soon found her way and went on to represent San Marino in the Eurovision Song Contest 2011 with “Stand By”.

From there, she embarked on countless tours locally and internationally. Bitten by the Eurovision bug, she came back to represent the country again in 2020 with the song “Freaky!” but was unable to compete due the cancellation brought on by the coronavirus restrictions.

Fortunately, Senhit was invited to return again this year and recently released her new entry “Adrenalina”. The song was inspired by all the adrenaline she accrued over the year and whilst on her ‘Freaky Trip To Rotterdam’ tour—a collaboration with artistic director Luca Tommassini which saw Senhit cover Eurovision songs and giving them a freaky twist. “That’s me,” she proudly announced. “A crazy freaky queen who still loves to be on stage and feel that adrenaline.”

That’s definitely one thing Senhit prides herself on: her individuality. She isn’t afraid to be herself. “I always had an original look, this extravagant look… I’m unique but in my craziness I feel special…even if I have my doubts about myself sometimes. I have my fragility, I have my insecurities, just like any normal human being, but I feel special because I am alive. I do what I love, I sing…and I use my special gift to share it with everyone.”

She admits that it sometimes takes the perspective of others to find one’s beautiful eccentricities. Her longtime collaborator, Luca Tomassini, encouraged Senhit to focus more on enjoying her performances and taking what is unique to her on stage. “He asked me to find something about me—the funny me, the beautiful queen—and I ended up finding it through transformation, like wearing a beautiful wig and stunning clothes, which, to be honest, wasn’t anything different from the normal me anyway. I like to be extravagant, I like to look good, but when I go on stage, the freaky queen comes out and that’s when I can really perform a good show.”

Speaking of wigs, Senhit tries to maintain the integrity of her natural locks at all times. “I try to take care of my hair. This is why, during shows, I use a wig. I can save my natural hair because it’s long, dark and super curly. I sometimes use a special oil too to keep it looking healthy —I love the Moroccanoil Treatment!”

So, what can we expect from Senhit’s performance for Eurovision 2021?

“So much colour. So much adrenaline, beautiful choreography, a lot of fun and many, many surprises,” she teases.

Senhit’s journey of following her heart—going from performing in her parents’ living room to travelling around the world in musicals and ultimately arriving at the Eurovision Song Contest 2021—is one of pure admiration. It reminds us that it’s okay to stay true to ourselves, to what we want, and what makes us who we are – and that Mom always knows what’s best.

In the end, Senhit believes that being an original is simply about being yourself, “in all your craziness, your weaknesses, your strengths. I know it sounds a little bit predictable, but it’s the honest truth…everybody has something original.”

Inspired by Senhit’s story? Be sure to follow her on her instagram and keep up to date on all things Eurovision via eurovision.tv.

We use cookies on our website to give you the most relevant experience by remembering your preferences and repeat visits. By clicking “Accept All”, you consent to the use of ALL the cookies. However, you may visit "Cookie Settings" to provide a controlled consent.
Cookie SettingsAccept All
Manage consent

This website uses cookies to improve your experience while you navigate through the website. Out of these, the cookies that are categorized as necessary are stored on your browser as they are essential for the working of basic functionalities of the website. We also use third-party cookies that help us analyze and understand how you use this website. These cookies will be stored in your browser only with your consent. You also have the option to opt-out of these cookies. But opting out of some of these cookies may affect your browsing experience.
Necessary Always Enabled
Necessary cookies are absolutely essential for the website to function properly. These cookies ensure basic functionalities and security features of the website, anonymously.
Functional
Functional cookies help to perform certain functionalities like sharing the content of the website on social media platforms, collect feedbacks, and other third-party features.
Performance
Performance cookies are used to understand and analyze the key performance indexes of the website which helps in delivering a better user experience for the visitors.
Analytics
Analytical cookies are used to understand how visitors interact with the website. These cookies help provide information on metrics the number of visitors, bounce rate, traffic source, etc.
Advertisement
Advertisement cookies are used to provide visitors with relevant ads and marketing campaigns. These cookies track visitors across websites and collect information to provide customized ads.
Others
Other uncategorized cookies are those that are being analyzed and have not been classified into a category as yet.
SAVE & ACCEPT
Skip to content