Get To Know The International Stylist Team Going To Turin! 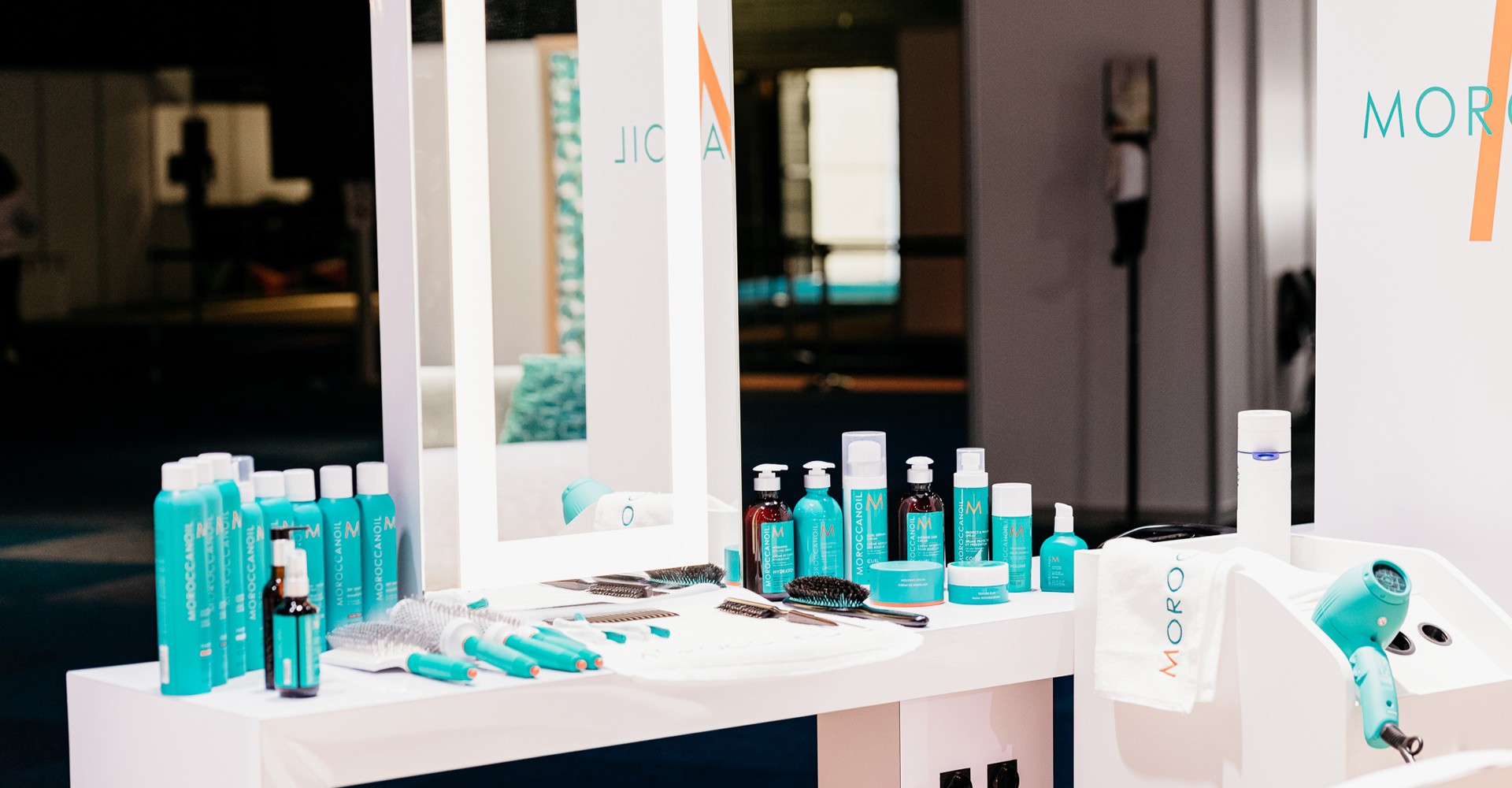 Flying in from all around the world, find out who will be styling the artists backstage at Eurovision 2022.

The Moroccanoil backstage stylist team is back! After a successful trip to Rotterdam in 2021, the team, composed of top stylists from across the globe, will provide styling for the artists and delegations participating in the Eurovision Song Contest 2022. For the first time in Moroccanoil x Eurovision history, the backstage stylist team will fly in top stylists all the way from the USA. We also welcome the return of some familiar faces who were part of last year’s ensemble, in addition to the new talent ready to turn up the (styling) heat in Turin. 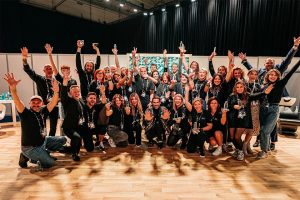 Moroccanoil Global Creative Director Antonio Corral Calero hails from Spain and returns to lead the Moroccanoil backstage stylist team at Eurovision for the second year in a row. The veteran stylist helped last year’s second runner-up Gjon’s Tears embrace his natural curls, gave Eurovision expert William of Wiwibloggs his Moroccanoil fantasy, and styled some of the biggest stars in the competition–from Bulgaria’s VICTORIA to Denmark’s Krista Siegfrids. Known for his infectious energy, passion, and attention to detail, Antonio is sure to bring the party and the style backstage at the PalaOlimpico. 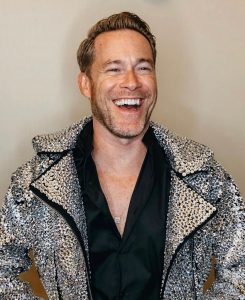 Moroccanoil Global Artistic Director Kevin Hughes will be making the journey from the United States to join the team this year. The highly-esteemed stylist has worked with Moroccanoil since 2011 and has been the Moroccanoil Artistic Director since 2017. Kevin is considered a backstage pro and has styled some of the world’s biggest celebrities, including Emily Blunt and Rosie Huntington Whitely. With all this experience under his belt, Kevin will play an instrumental role in the team in Turin and will be joined by fellow American stylist, Nneka Tull.

“The Eurovision Song Contest is legendary and a dream come true for me.”Nneka Tull

Franck Perez joins the backstage stylist team on the back of a successful trip to Rotterdam in 2021, where he delighted fans with a behind-the-scenes view of the Eurovision Song Contest. The France-based stylist is part of the Moroccanoil International Artistic team and has worked with the brand for nearly a decade. Returning with him for the second time is Angelo Fraccia, who knows from his experience last year that styling at Eurovision is a “totally different ball game”. The Moroccanoil International Artistic Team member was also involved in the creation of some of the most intricate looks seen on stage at Rotterdam Ahoy, including the iconic topknot styles worn by Samantha Tina’s backing dancers. 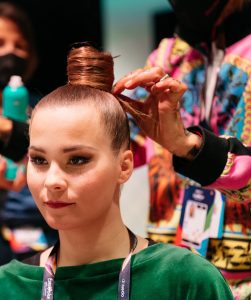 Samantha Kenyon certainly made her mark on the team last year and will make a comeback for the competition this year in Italy. The firecracker from Manchester–whose personality is every bit as vibrant as her hair–shared a day in her life backstage at the Eurovision Song Contest 2021, as she prepared the artists ahead of their live performances. She will be traveling with Justine Donnelly from the UK, who has been working in the industry for over 30 years! The hair consultant has worked at London Fashion Week for the last 6 seasons and joined the UK Moroccanoil team back in 2014.

“To have the opportunity to join the Moroccanoil team backstage is an honor.”
Justine Donnelly

Mariska Schutten (Moroccanoil International Artistic Team) will also bring her extensive knowledge of hair and Moroccanoil products back to Eurovision for the second year running, together with the UK Director of Education, Vanessa Doherty who made sure the Moroccanoil backstage bubble was running like a well-oiled machine. Salon Owner Hanneke Brattinga is also no stranger to the Eurovision Song Contest. The Dutch expert stylist with over 20 years of experience was one of the only team members given access to the green room where she provided last-minute touch-ups to the artists right before they hit the Rotterdam Ahoy stage.

“I’m so excited to be back this year, working with my fellow Moroccanoil stylists to create amazing looks for the contest.”
Vanessa Doherty 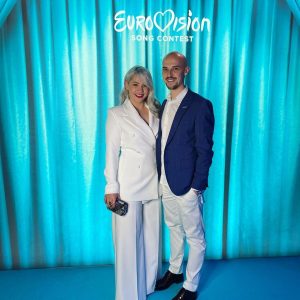 Ioana Todoran won the first Moroccanoil Show Us Your Style competition last year by demonstrating her impeccable styling skills and outgoing personality in her audition tape. The multi award-winning senior stylist was rewarded with a VIP trip to Rotterdam as part of the backstage stylist team. Since then, her career has skyrocketed, ultimately securing her place again in this year’s team heading to Turin.

Aurora Poncce assisted Antonio in creating three Moroccanoil Then and Now campaign hairstyles inspired by some of the most iconic Eurovision looks from the 60s, 70s and 80s. Aurora is “ready to make the the stars of Eurovision shine the brightest” along with her fellow teammate, Hanna Liepkova who was also a part of the Then and Now campaign shoot.

Lindsay Schets and Natalie Vernackt from Belgium both received return invites to the team after a stellar performance backstage in Rotterdam, as did UK Creative Team Educator Sharon Dale, stylist Irlin Hansen from Norway, and salon owners Rachida Bamzil from the Netherlands and Paulos Moros from Greece.

“Being a stylist backstage at Eurovision is more than prepping hair, we are supporting the artists and their creativity.”
Loes Heuser

Joining for the first time is Annamaria Remonti from Italy. Annamaria has worked with Moroccanoil for years and is a true image consultant known for dedicating the time and resources into the study and research of trends. She will be joined by fellow expert stylists from Italy, including Creative Director Marco Festa, salon co-founder Isabella Bonzi, salon owner Angelo Simonelli, and stylist Antonio Tamarro.

The backstage stylist team will be injected with a boost of fresh talent from the winners of  the 2022 Show Us Your Style: Then and Now competition. Sergiu Popa from Romania, Sergo Kirakosiani from Georgia, Dorion Karlsson from Sweden, Elena Kalashyan from Ukraine, Jaana Katariina Lauronen from Finland, and Hailey Thome from the United States will receive an all-expenses paid trip plus VIP tickets to the Semi Finals and Final show, in addition to their inclusion to the backstage stylist team.

We look forward to watching their passion, creativity, and artistry at the Eurovision Song Contest 2022.

We use cookies on our website to give you the most relevant experience by remembering your preferences and repeat visits. By clicking “Accept All”, you consent to the use of ALL the cookies. However, you may visit "Cookie Settings" to provide a controlled consent.
Cookie SettingsAccept All
Manage consent

This website uses cookies to improve your experience while you navigate through the website. Out of these, the cookies that are categorized as necessary are stored on your browser as they are essential for the working of basic functionalities of the website. We also use third-party cookies that help us analyze and understand how you use this website. These cookies will be stored in your browser only with your consent. You also have the option to opt-out of these cookies. But opting out of some of these cookies may affect your browsing experience.
Necessary Always Enabled
Necessary cookies are absolutely essential for the website to function properly. These cookies ensure basic functionalities and security features of the website, anonymously.
Functional
Functional cookies help to perform certain functionalities like sharing the content of the website on social media platforms, collect feedbacks, and other third-party features.
Performance
Performance cookies are used to understand and analyze the key performance indexes of the website which helps in delivering a better user experience for the visitors.
Analytics
Analytical cookies are used to understand how visitors interact with the website. These cookies help provide information on metrics the number of visitors, bounce rate, traffic source, etc.
Advertisement
Advertisement cookies are used to provide visitors with relevant ads and marketing campaigns. These cookies track visitors across websites and collect information to provide customized ads.
Others
Other uncategorized cookies are those that are being analyzed and have not been classified into a category as yet.
SAVE & ACCEPT
Skip to content