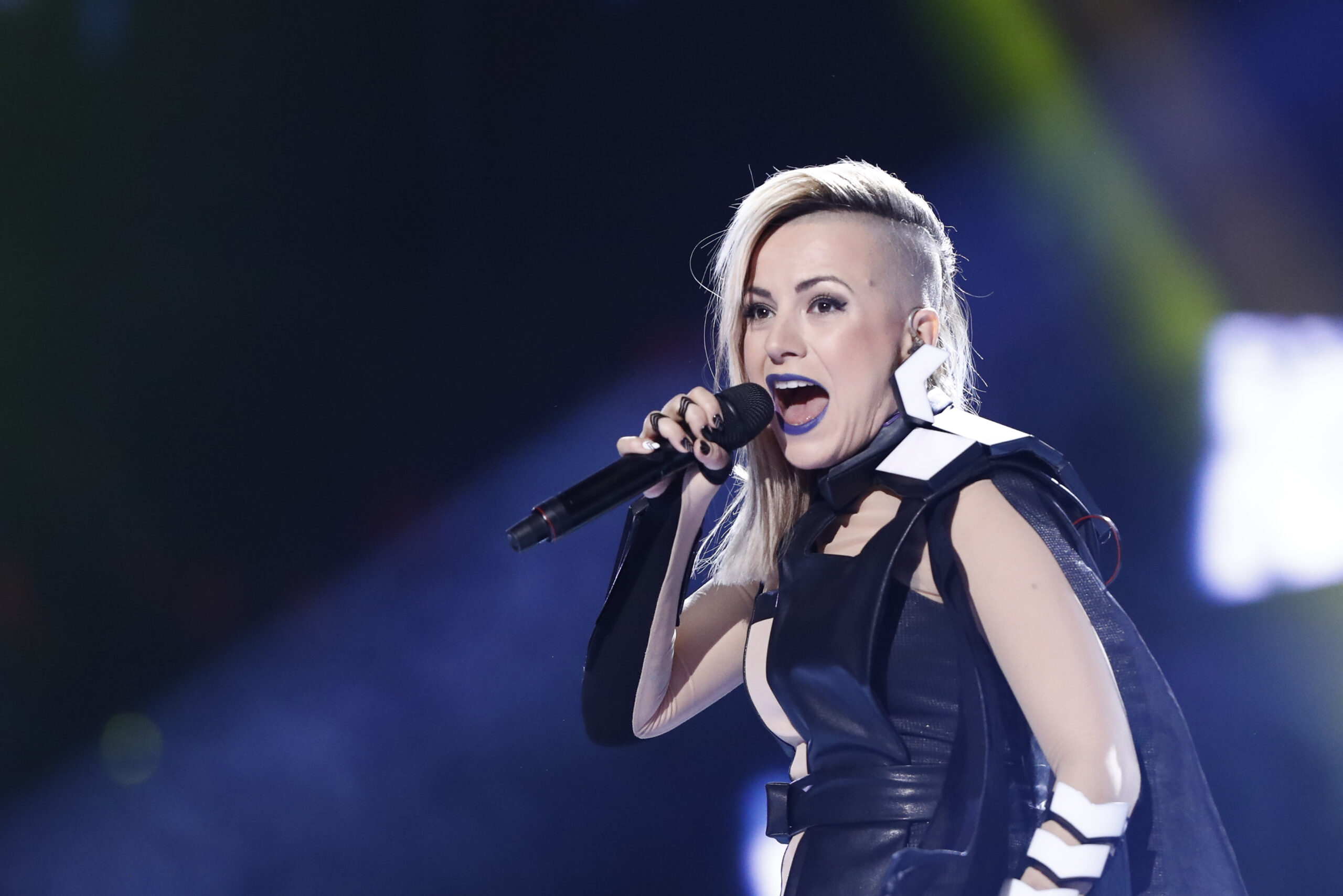 It feels just like yesterday—yet in other ways, almost a lifetime ago—that we were living in the 2010s. This decade saw an eclectic range of hairstyles, from half-shaved-heads and man-buns to pastel colours and beachy waves. (And that’s just to name a few.) Recently, our nostalgia got the better of us, so we decided to travel back in time for some hair inspiration using the Eurovision Song Contest as our guide.

This is Leonor Andrade from Portugal who performed in the Eurovision Song Contest back in 2015 with a subtle ombré / balayage look.

Ombré (meaning “shade”) and balayage (meaning “to sweep”) were very popular trends in the 2010s, when many women wore their hair darker at the roots and lighter at the ends, with a gradual transition in between. Face-framing strands were often colored more brightly or closer to the roots in order to frame the face and create dimension.

Of course, the lived-in look lives on to this day. Often matched with a lob or long layers, it exudes an effortlessly cool vibe and is perfect for those wanting to grow out their dyed locks with style.
Given the skill required to master these coloring technique, we highly recommend you visit an experienced hair stylist to ensure you get a look you love. For a more natural and subtle variation, request to keep the ends just one or two shades lighter—it creates a subtle sun-kissed effect.

Finland’s 2013 representative and Eurovision fan-favourite Krista Siegfrids styled her blonde hair with beach waves—a style that spread far beyond the beach throughout the 2010s.

Often paired with ombré or balayage colored hair, beach waves were easily one of the most-requested styles of the decade. And though they’ve evolved, they’re still very much a go-to look today. We wouldn’t be surprised if they make an appearance at Eurovision 2021, but we’ll just have to wait until May to find out!
To get this look, all you need is heat protectant, a curling iron, and a generous spritz of texture spray to create that effortless surfer-girl vibe.

This is ZENA from Belarus in the Eurovision Song Contest 2019 rocking a lob. While the term “lob”—short for “long bob”—might be new, the cut is a fairly timeless style that grew in popularity throughout the 2010s and remains sought-after today. Longer and often more lived-in than the bob, the lob lives somewhere between the chin and the collar bone.

This cut felt truly ubiquitous in the 2010s, in part because of its versatility. The decade saw variations that ranged from sleek and swishy to highly textured, some with bangs and some without. There truly was (and still is) a lob for everyone. A trusted stylist can guide you toward one that suits your facial features and lifestyle!

Salvador Sobral, Eurovision 2017 representative and winner for Portugal, memorably sported a half-up ponytail that felt like a close cousin of the “man bun”, a style that rose in prominence throughout the 2010s.

The look was somewhat divisive, with a “love it or hate it” element that seemed to inspire copycats and scorn in equal parts. Some searched for clip-on faux buns while others wanted nothing to do with the look.

In our opinion, there’s absolutely nothing wrong with a well-executed man bun. If you’re planning to attempt your own, talk to your hairstylist to help you navigate the awkward growing-out phase.

One of the best things to come out of this decade was the rise of fashion colors. Eurovision couldn’t escape this trend either, with Portugal’s Cláudia Pascoal rocking this look in 2018.

Soft pastels, particularly pink, went mainstream and even became an acceptable hairstyle in many workplaces. What’s so amazing about this trend is that it’s not only an easy way to make a statement, but also allowed those who might shy away from vibrant color to experiment on their own terms.

These days, trying a fashion color is easier than ever. Moroccanoil Color Depositing Masks are ultra-nourishing and formulated to fade out over time, allowing you to test drive a new color without making a long-term commitment. To pastelize a fashion shade, just mix one part Color Depositing Mask with three parts Weightless Hydrating Mask!

Even though the middle part is all the rage right now, the side part—even the deep side part—that ruled the 2010s survives today.

Early variations involved pushing the hair pretty much entirely over to one side of the head, giving the hair a casual, lived-in feeling. To recreate the look for today, blow-dry your hair and add waves, or keep it relatively straight with a bit of movement and texture. Then take one side of the hair, tuck it behind your ear and pull it around to the opposite shoulder. For extra security, add some pins at the side and back to keep it neatly in place and finish the look off with some hairspray to lock it in.

Of course, you can take it one step further—like Bulgaria’s Poli Genova did back at Eurovision 2016—and just shave one side of your hair entirely to create a truly dramatic look. This was also another trend we saw back in the 2010s, although it has lost its momentum.