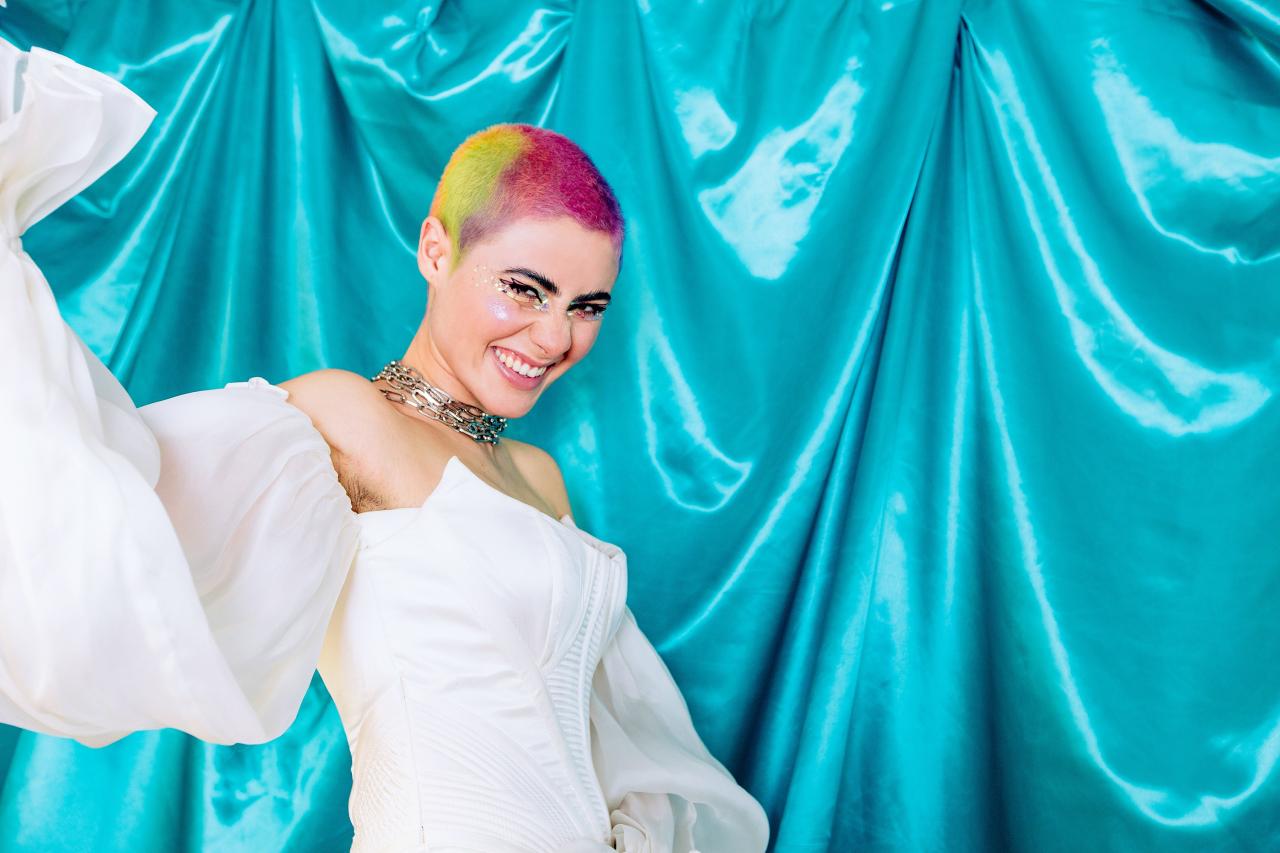 Jessica Cerro, stage name Montaigne, is a singer, songwriter, and musician extraordinaire who epitomises what it takes to Be An Original. We caught up with the talented Aussie to find out what originality means to her—plus exclusive details on her upcoming performance, her favourite Eurovision looks of all time, and more.

“To me, being an original means acknowledging the fact that all, ostensibly, original works, or people who come across as unique and original come from a series of references. No one ever does anything without making reference to something that they’ve consumed or witnessed in the past.”

Montaigne is the first to admit that she “unashamedly” sources and integrates other people’s work in order to create her own “all the time”. Putting together elements of inspiration that people wouldn’t ordinarily expect would be placed together “but bringing them together anyway” is what Montaigne views as original things.

“To me it’s just about having varied interests and an open heart to the world and being able to unite those things,” she explained.

Montaigne was voted to represent Australia in the Eurovision Song Contest 2020 before the coronavirus restrictions resulted in its cancellation. That year her performance of ‘Don’t Break Me’ stood out for more reasons than her poetic and animated choreography. She also sported a clown costume and bright blue, curly hair.

Fortunately, she was invited to return to the world’s largest music competition for 2021 with the song ‘Technicolour’. This time it looks like she’ll be rocking a multicolour buzz cut, if her Instagram is anything to go by.

Generally speaking, Montaigne’s fashion muses often come from childhood influences. “I grew up in the early 2000s and I wouldn’t say that all my wardrobe resembles the early 2000s, but I’m definitely dabbling with that at the moment.”

Unable to give away too many hints about her upcoming performance, she was able to spill some clues: “the energy of the whole performance is quite inspired by the teen-girl/woman vigilante media that I grew up with, like … Kim Possible, Sailor Moon and all of that stuff … which I’m very excited about.”

Her Eurovision 2021 entry ‘Technicolour’ is a song of resilience and perseverance. It acknowledges the hardships we all face in life but reminds us that we all have “this reserve of energy and power and courage… that you can tap into at any given time.”

“And the song is incredibly camp—on purpose,” she adds. “ I just wanted to make it incredibly delightful and playful and camp. I love that idea of teen/queer vigilante girl identifying group who takes down billionares or something like that.”

Her ability to come up with such a diverse array of distinctive onstage looks seems to come naturally. Decisively stating the qualities that make her an original, she says, is a bit more complex.
“I don’t know if this question can be answered by me. I don’t think I have the perspective for it and ultimately, I mean, if there is anything that makes me an original as an artist, it’s probably my voice. I don’t think anybody has a voice like mine or can necessarily sing in the same way that I do or write in the same way that I do—at least that I know of at this point in time. That feels original.”

Regardless, finding the components that make her one-of-a-kind isn’t as important to her as it used to be. Reflecting on her early days as an artist, Montaigne felt that if she “wasn’t actively striving to be ‘original’”, then she didn’t see the point.

“There was a time where I just wanted to wear pajamas on stage. And I did that with an anti-consumerism and materialism message in mind, which feels very silly now. I don’t look upon that time fondly—it was irreverent in a really bad way.”

Her style has evolved over time to match her keen interest in upcycled, recycled, and sustainable fashion. She now opts for unique clothing that “strikes the balance of feminine and masculine…that skews more to the feminine”—things that feel unique, and preferably made by local designers or students.

Nowadays, she is “a little less preoccupied with that notion” of originality and less likely to chase the idea of “absolute singularity.” Montaigne now prefers to “enjoy things, enjoy life” and the art that she creates, in the hope that it ultimately “does combine to something that does feel new or novel or unique in the world”.

And Montaigne doesn’t believe that originality is the only key to success in Eurovision either:

“I’ve gone through the chronicles of the Eurovision Song Contest participants and winners of the past. Some people are really left of field and out there and original and some people are just really conventional and make a song that’s guaranteed to do well because it’s familiar but just new enough to not be boring.”

Some of her favourite Eurovision songs of all time have come from arguably the most creative entries too, including Netta’s ‘Toy’ from 2019 and Daði Freyr’s ‘Think About Things’ from the class of 2020.

“I love anything retro-futuristic,” she said. Which is why Kate Miller-Heidke’s “Frozen/Elsa get-up … Loreen’s very minimalistic, but beautiful and flowing dancewear,” and “Dami Im’s sparkly glove” are some of her top Eurovision looks of all time.

Montaigne’s outgoing message to her 2021 peers is one of support and solidarity:

“I hope that everyone has fun and that they are proud of the work they are producing this year and they don’t feel too much pressure… It was a really hard year, and we are ultimately really creative people and are usually pretty sensitive.  My only hope is that everyone can acknowledge and nourish that sensitivity and not to get too downbeat if things don’t go to plan—particularly with the internet that can be very savage sometimes. I don’t feel like they are a competitor. I want to give them my support. I just want everyone to release great music and have a good time!”

The humble Montaigne maintains that anyone can be original, they just need to “find the courage to express it.”

We can’t wait to see Montaigne in all her technicolour this May!

Stay up to date with Montaigne on her Instagram and be sure to check the eurovision.tv page for updates.